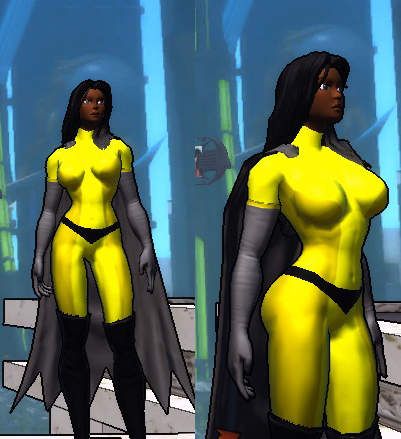 BODY TYPE: quite strong and voluptuous

Lumina uses her control over light to dazzle and blind her foes so that she can defeat them. She also has above-average strength and good fighting skills, making her a powerful superheroine.

Her powers are far less effective in daylight or well-lit rooms than in darkness; for that reason she is a mostly nocturnal superheroine. Any foe who found out her weakness would have a better chance of defeating her, although she is still quite strong.

Born in Kingston, Jamaica and spending the last 5 years of adult life in the USA, Lumina has grown into a mighty superheroine, stronger than most and with a long string of victories to her name. She used to be challenged when she first started at the age of 16, as her power over light was only low-level. However, her strength has more than doubled since then. Her beginnings were as a vigilante, but once she proved herself a champion of justice and fair play she was welcomed into the law enforcement community of New York City where she now resides.