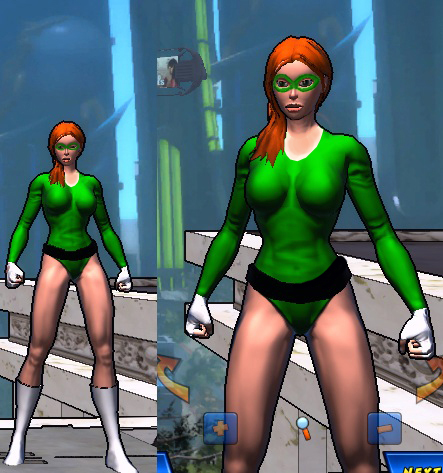 Telekinesis, giving her the ability to move objects with her mind. This includes herself, in the form of levitation. She’s working on trying to develop that into flight, but it’s a slow process. Also, in addition to being able to deflect incoming objects and projectiles with her mind, she can direct her energies at opponents in bursts of force. Mindwave is also a low-grade telepath. She doesn’t have the ability to read minds, per se, but she can sense motives and intentions. It’s a useful skill in combat situations, as it augments her otherwise normal strength and speed.

Her biggest weakness, aside from inexperience, is the receptiveness of her mind to others’ thoughts (due to her own telepathic nature) which leaves her more vulnerable than the average human to psionic attack and attempts at mind-control.

Josie is highly intelligent, but also possesses the impulsiveness of youth. Compassionate, but also snarky. She usually doesn’t go into battle without a plan, but events can lead her to go off-script should circumstances suggest better ways of achieving her goals. She has a deep contempt for those who would do evil or stand in the way of justice.

Josie McCallum has, from a young age, been motivated by a desire for justice. As far back as she can remember, Josie planned on either becoming a police officer or a lawyer when she grew up. A smart and very sensitive child, McCallum was noted for both her sense of fairness and also empathy for those around her. She excelled in school, and also in martial arts classes.

But around her 13th birthday, Josie became aware that she was not like normal girls.

One evening, having gotten into trouble with her parents – unjustly, in Josie’s view – the young girl’s rage led to something quite extraordinary happening in the privacy of her bedroom. To her astonishment, Josie suddenly saw books flying off the shelves, CDs and DVDs swirling in the air. She might have been inclined to think it was some sort of ghost, until a glass of water shot toward her face…

… and she stopped it, just by thinking it should stop.

Having discovered this talent, Josie soon wondered whether there was also something more to her ability empathise with other people. Then, during one judo class, she realised that she wasn’t just anticipating what her opponent was about to do, she was (ever so faintly) feeling him think it. Realising that her gifts might allow her to achieve her aims of bringing justice to the world, Josie began to develop those abilities in secret. She also began looking into ways to find others with special abilities, who might be able to help Josie hone her own.